How to reach us

LAUNCH OF WINES IN VINMONOPOLET 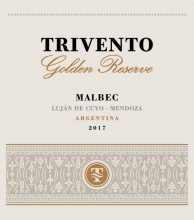 On November 1st, Vinnmonopolet did the traditional autumn launch. There are new Argentine wines available on the biggest stores. One of them is Trivento Malbec Golden Reserve (item 5260201), that recently received a very positive review by Aftenposten.

Trivento means "Three Winds" and was named after the Polar, Zonda and Sudestada winds which blow over the sunny and dry Mendoza area and makes a mark on the vines growth.

Malbec is the grape that has adapted to the Mendoza climate the best, and especially the area Ljuan de Cuyo. Malbec is therefore Argentina's national grape and it dominates the oldest vineyards planted from 1890 to 1920.

Germán Di Césare is the Chief Winemaker at Trivento where he started in 2002 as a young and passionate winemaker assistant. He is now part of the new movement that represents the development of Argentine wine production and culture.

It is worth to try it during this end of year celebrations!!